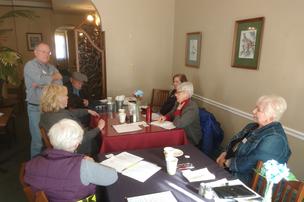 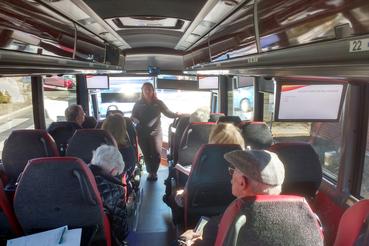 9:00 Registration & Morning Brew (on your own) Auraria Faculty and Staff Club

11:00 Break (Walk to the Auraria Faculty and Staff Club)

12:30 Lunch (Served in the Auraria Faculty and Staff Club)

1:15 Issues of Group Touring (Small Group activity, report back to whole group) In “table groups,” participants will discuss situations that have occurred on a group tour and arrive at a solution for the tour guide. Each table group then presents their solution to the whole group and receive comment.

us out to the Arrow coach, waiting nearby.  Mike introduced Sherri

David, Denver Administrative & Safety Assistant who is a great resource

for any tour manager/tour guide.  She has been a driver for 30 years,

was in the Army for 10 years, and is now the Safety and Training person

at Arrow – a position she has held for 4 years.  Sherri is also a graduate

of IGA.  Sherri introduced us the several styles of coaches and described

for OTR tours – safety and reliability are key.

All of these have microphones, be sure to check it out – the wireless mike may not be working, generally the wired mikes do work.

Sherri stresses three points of a successful tour guide: Effectiveness, are you able to handle a critical incident and are you aware of your environment.

We each introduced ourselves to Sherri – we have varied roles in tourism: docent, tour guide, tour manager, M&G, Amtrak, Visit Denver, and the Capitol.

Sherri went over requirements for loading and unloading a coach:

The coach is not supposed to idle longer than 5 minutes

The driver loads the luggage – NOT YOU – nor the passengers

Remember that it is YOUR RESPONSIBILITY to match passengers and luggage

Drivers have QR app that they can run to see the video on how this particular coach is run, how to work the audio/visual, etc.
Driver requirements:

This month’s class was on pre-check

Last month’s was on driver fatigue

These classes can be done by phone

For a tour guide / tour manager- Arrow suggests that you sit and face forward – much safer than any type of standing might be.  All the newer coaches have seat belts (since 2010) you would be wise to use them – even though there is not a law requiring the use.

If you as a tour guide/manager have issues with the driver, communicate them to the driver – customer service is               extremely important at Arrow

When do you call the company to report the driver?

After lunch, Mike Pearl continued with our education:

For extreme response such as an active shooter or incident in the area:

There are three options (check the Homeland Security video):

Mike had suggestions for the protocol in such scenarios:
In Washington, DC – look for the National Park Police

What are your options?

And who might have difficulty getting off the coach

Afterwards, you and others may need to be treated for PTSD
On a coach, you cannot practice a walk-through of an incident so do it in your head to be sure you know what steps to take to work on the problem

We finished up at 3pm and, as you can see, there is lots of information to digest and many scenarios to think about and ways to avoid or resolve problems