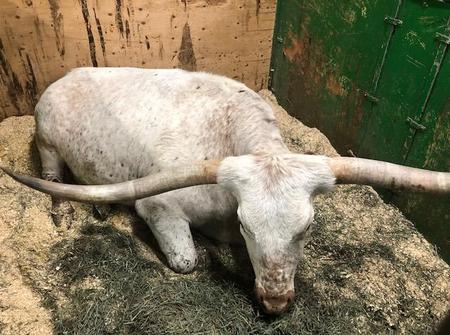 I missed the free parking lot, ended up parking just outside the Education Building.  Larry Ralston (former RMGA member, former Program Chair, former Education Chair) helped arrange and coordinate our tour with NWSS.  Larry also gave many of us an A-Z Guide for this year’s National Western Stock Show.  This guide includes a map of the campus, arrival and departure times for every breed of animal exhibited, how to get tickets and just about anything else you could wish to know about NWCC.  The information booths provided Guest Guides and site maps free.

Keith Fessenden (Archivist/Historian) of National Western had just started speaking.  The group met in the Centennial Room on the 3rd Floor of the Education Building.  Jenna Espinoza (Mayor’s Office of National Western Stock Show Communication) gave us a very detailed overview of the $765 million construction budget to update the stock show site.  The reconstruction will have eight phases.  Phase 1 and 2 are under way and expect to take seven years to complete.  This update has many equity partners – Jenna offered to send us all the PowerPoint show she presented (at this time – 1-28-19 have not received this).  Mike Dulude (Education Chair) may have access to this – check with him.

The four entities most involved are:

Build it – the Mayor’s office

Phase 1 and 2 are getting under way.  Once phase 1 and 2 construction is completed, the National Western Center Authority will maintain and operate these new facilities for 100 years.  Jenna reminded us that the last Thursday of each month has an update meeting that is open to the public – usually about 3 hours – text 64600 to get updates on the reconstruction.

The NWCA operates the current facility which is booked for livestock, equestrian, and similar events throughout the year.

One of the major changes will be the addition of an RTD light rail station on the upcoming N line with a pedestrian bridge to the Stock Show campus.  This will be the first stop from Union Station and the N Line is expected to go to 120th.

Jenna gave us each a small map showing the planned changes.  The renderings show current waste water pipes which will be moved, and their location will become six acres of open space.  There will also be a bridge constructed on 51st that goes over to Globeville.

Keith Fessenden was at History Colorado before moving to the NWSS – he is a historian and has volunteered at NW for 25 years as an archivist.  Keith’s presentation showed us historic photos of the campus/complex and some of the changes that will occur over the reconstruction.  The sheep bridge will no longer be functional.  The water tower (a focal point) will be moved.  The 1909 historic building is undergoing feasibility studies to transform this building into Denver’s first public market (similar to Pike’s Peak Place in Seattle).

The Triangle will have four required assets:

Keith showed several photos of the stock yards:  the first stock yards were on Blake Street, the 2nd were at Union Station, the 3rd at 7th and Broadway, the 4th next to the railroad tracks and in 1881 the stock yards moved to the current location.  Keith commented that the railroads made the stockyards.  Animals could be moved great distances in a short amount of time.  The railroads had special excursion fares – the cowboys rode with the animals.

Some of the Railroads were:

Armour, Swift, Bar S all were here and each had its own spur line and switching engine.

In the 1870s cattle came from the Western Slope.

The stockyards sold cattle, sheep, hogs which were then shipped East for slaughter
At one time NW was the largest sheep market in the world and also the 5th or 6th largest cattle market (could be 6,000-7,000 animals.  The walkway over the stock pens was built in 1950 – still in use today.

1906 – Current stockyards built – first stock show – the hotel in the photo is a tent – from Tammen – who bought Buffalo Bill’s Wild West show.  There was a two-story barn on the hill – close to the current Education building.

The cattle get tied outside at night so that they don’t start to shed hair which would put them at risk when they are back home.

Cattle – 23 breed shows use the NWCC during the year

Mini-zebu (they look like miniature Brahmas) – from the Indian subcontinent – the first show was at NWCC.

We walked along the bridge over the pens and looked at various breeds of cattle and the beauty parlor treatment they were getting before being judged.  Besides being judged individually animals can be judged in groups of 3 or 5 (a pen) or in groups of ten (a car).  The wood in the stock pens will be repurposed in the new buildings, or it could be sold as a fundraiser.  The hooks and catches on the pens are all hand-wrought.

Stock show is in January – generally a slow month for ranchers.

Kelly Lombardi (Director of Volunteer Services) offered an overview of volunteer positions at NWCC.  Kelly’s been in charge of the volunteers for 30 years.  Sign up online- they ask for 30 hours/year and there are things to do year – round (i.e., incident reporter, art room) there are 15 different areas where volunteers are used.  There are 6-7 orientation meetings/year – each 1 hour long.  Currently they have more than 800 volunteers.

After our tour we had lunch at the Stockyard Saloon – good food, good company.  To finish out the day, several of us returned to the Education Building for some shopping.

A sad note – for the first time in many years, a rodeo competitor died – most of us contributed to the fund for his family.  A blurb in the Denver Post said that over $200,000 had been collected for his family over the past week.  We added a very small amount to the total.